skip to main | skip to sidebar

My Father as Specters of Trujillo

My father always stands
with his fists on his hips,
thumbs hooked into beltloops,
legs spread under his silverback
frame. I've seen him stand
this way many times. The minutes
after he shot the horse in the star
between its eyes. The days he spent
surveying plots for walls and pools.
He pointed with one hand, gold Rolex
clack-clacking on his sweat-dripped
hairy wrist. The time he stood on a mound
of firm red earth as the Haitian wrestled
a boa constrictor from the roots
of the flamboyán tree. The only time
I don't remember his fists on his hips
was when he danced or when
he told me he wanted to kill
me as he sucked on the steak bone.

into the fogged bathroom.
He lurched towards me, his feet

slap-smacking the marble floor,
both arms out, that famous cock

swaying in the dark coils. I am surprised
that now the whole is more difficult

to recall than the parts. That satyr coming
towards me to shut the door.

I could not find the photo—the one
with my father's arm
like a cane crooked around my mother's
shoulder holding her tight against his
body. The photo was spontaneous.
Her leg cocked, caught off-balance.
Even their shirts favored each other –
his a smothered yellow like a sick yolk
hers a green like an embryonic lime.
The saw-grass roped around
their knees. Two palms stuttered behind
them—the one on the right with breasts stout
with fruit. Heifers foraged the pasture,
their hips and hooked tails towards
my parents. This used to be my father's
kingdom. This hacienda the first land
my swamp-eyed grandfather
bought with adulterated money.
My father sold the ranch after
he shot the bull that gored
all that moved, and the diseased steer
that sounded like singing

My father had two kingdoms. The first
given to him by my grandfather, the one

with snake lips, who took my father
to a whorehouse when he turned

sixteen. He gave my father
this land, sudan grass that rollicks

in the wind. The slant-roofed slap-board ranch
house on stilts. The pastures bruised

with cattle. He'd watch the gaucho
gallop his horse with no hands, guiding

the bay with his seat and legs as he swings
the boleadoras, that weighted rawhide whirls

faster and faster until he releases
and the bolas trip the steer at the hocks. The second

inheritance was nothing but stones, men,
panes. He kept the one he loved most.

My father will never leave this island
because here he says he is like a god.

Here someone cuts his steak. Here
he dives shipwrecks to pick bottles

coral crusted from staterooms and galleys.
Here he comes into realms. Of cattle.

Of men. He nurtures these for some years
and sometimes lets them go. Nowhere else does this man's cock

rise so regally, infuse so freely. Nowhere else can he
order the boatboy to scrape barnacles off the hull,

even though those crustacea aren't even there –

6. Father of a New Nation

With elbow on the window ledge,
his first finger and thumb hooks on

again that I made it all up. Even though
in the hotel room I heard that woman's voice

that sounded like teeth against oyster
shells on the machine. I called my mother

and demanded she come get me.
That night was marked with blood,

the first blood that glided down my inner
thigh, staining the carpet.

He corrected me by saying
I shot the horse in the neck
not between the eyes. I love
my father. For the first eight years
we played a game. I'd lieon his shaggy chest
my neonatal breasts against
his stomach. Slowly I'd press
his nipples—two barren limpet shells fringed
by seaweed, and he'd scrunch his lips
and release a raspberry. After the divorce
I'd visit each summer, but he spent
all his time at construction sites.
Sometimes I'd follow him. Watch
how all workers feared him. I guess
some could call it respect. My father
once came back from the job at midnight. Earlier
he promised we'd go to the beach and I sat
on the couch in my swimsuit. He took me
into his arms into the surf, even though
there were no lights, not even the moon.
The black water, the waves' white
crests, but mostly I remember feeling close
to him. Closer than I ever felt as I fused
to his matted chest in that darkness – 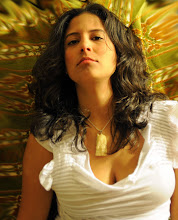